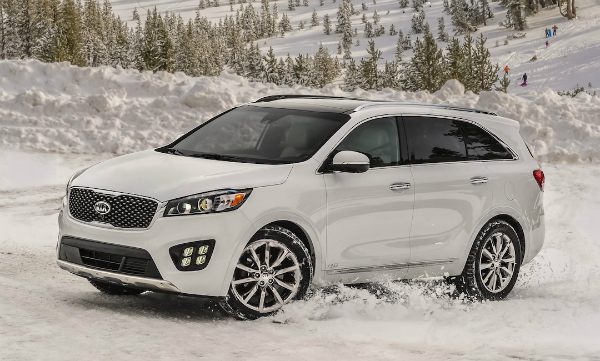 2016 KIA SORENTO by Jim Corbran, Automotive Columnist I’ll be the first to admit to not being a big fan of the crossover genre. Give me a big ol’ station wagon any day. Barring that, give me a minivan the size of my old ’95 Dodge Caravan — which actually fit in our garage. Today’s “mini”vans seem large enough to have their own zip code. But, I’m starting to warm up to the crossover a smidge. They’re a huge improvement in comfort and drivability compared to the truck-derived ginormous SUVs of just a few years ago. They’re also better on gas and many now provide third-row seating in a manageable size — although using all three rows cuts way down on cargo space. The new Kia Sorento is a good example of the new breed of crossover. Available with four or six cylinder engines, two or three rows of seats, and in five different trim levels, the Sorento should be able to fill the bill of any shopper who misses the old style station wagon which, let’s face it, is probably never coming back. Front-wheel-drive models start at $24,900; the least-expensive AWD LX starts at $28,000. Go crazy and price one out at over 47 grand if you like! Checking one local dealer’s inventory showed almost 100 vehicles ranging in price from $26,020 to $45,400 so there’s something for just about everybody out there right now. Price one for yourself, see more photos, and read more about the new Sorento here. ### The post 2016 KIA SORENTO appeared first on Buffalo Cars.