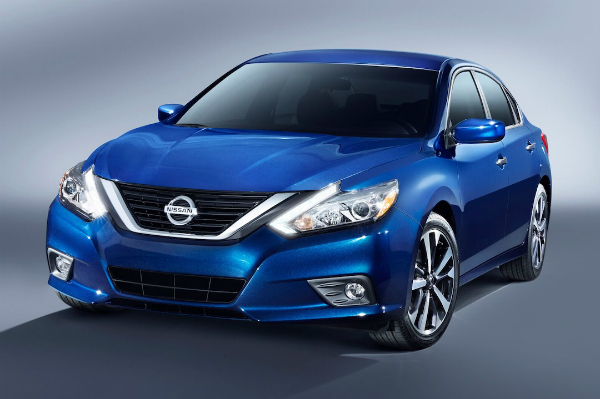 2016 NISSAN ALTIMA by Jim Corbran, Automotive Columnist Today we learn not only about the new Nissan Altima, which should be available in late November, but also a bit about the man behind Nissan, chairman and CEO Carlos Ghosn. First of all, about that surname. The “s” is silent, and the “gh” has the same pronunciation as “ghost.” It rhymes with the English word “tone.” There, that was easy. Ghosn, who also runs the French automobile manufacturer Renault, was born in Brazil and has a French/Brazilian/Lebanese background. I’d love to see the buffet table at his family reunions! Ghosn was recently in New York where he unveiled the 2016 Nissan Altima. An extensive restyling, reduced weight, beefed-up structure, and a redesigned center stack are some of the highlights. The Altima has shown sales gains in each of the past five years, and isn’t resting on its laurels, with an Advanced Drive-Assist Display positioned in front of the driver, best-in-class (according to Nissan) fuel economy of 39 mpg, and a new suspension designed for better handling. The Altima has enjoyed great sales success against the Camry, Accord, Fusion, and Malibu — probably its main competitors in the mid-size sedan market. The 2016 model should continue the trend. See more photos and read more about the new Altima here. ### The post 2016 NISSAN ALTIMA appeared first on Buffalo Cars.