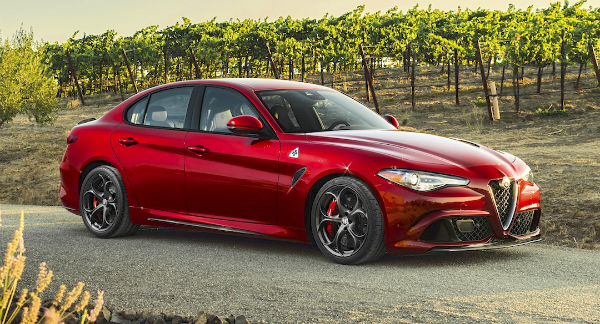 ALL NEW ALFAS COME WITH FREE ROSETTA STONE PROGRAM by Jim Corbran, Automotive Columnist Not really. But Alfa Romeo, much like Fiat in the US, likes to throw the Italian language around in its press releases and descriptions of its cars (which are back in American showrooms after a decades-long absence). Seeing that, yes, there will be an Alfa dealer here in WNY, I thought I’d shed a little light on what to expect. There’s a really niftemundo (okay, not an Italian word) 4C Coupe that’s already made its way across the ocean. You know it’s a hot car when it’s on the list of Playboy magazine’s “2015 Cars of the Year.” Alfa describes the front grille as having a “plunging neckline.” That seems about right. Its companion 4C Spider roadster has also made the trek. I saw these cars in person at the New York Auto Show and yes, they’re wunderbar! (Oops, wrong country.) In addition to the 4C, Alfa will also be sending us the Giulia four-door sports sedan. Well, “four-door” is over-simplifying things, as it’s actually named Giulia Quadrifoglio. Even those of you who speak no Italian can probably translate that for yourselves. According to Alfa, the Quadrifoglio is “…the first of a new lineup of vehicles built off an all-new world-class rear-wheel-drive platform that embodies La meccanica delle emozioni (the mechanics of emotion).” I couldn’t have said it better. The Giulia should appear in North American showrooms sometime late in the spring of 2016. I’ll be waiting. See more here: Alfa Romeo USA ### The post ALL NEW ALFAS COME WITH FREE ROSETTA STONE PROGRAM appeared first on Buffalo Cars.