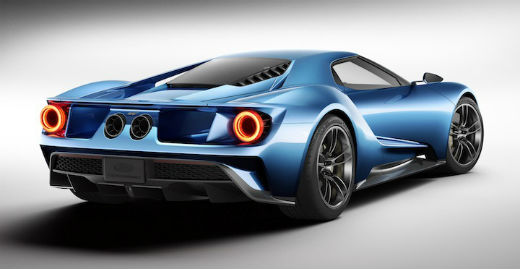 AN AMERICAN SUPERCAR by Jim Corbran, Automotive Columnist It’s the middle of January, which annually means the start of the North American International Automobile Show — a.k.a., the Detroit Auto Show. And Ford is making big waves at this year’s show, with the introduction of an all-new, carbon fiber-bodied Fort GT. Powered by a twin-turbo EcoBoost V-6 which produces over 600 hp, the exotic sports car will go into production (for “select” global markets) in 2016, just in time to compete in the 50th anniversary year in which the original Fort GT finished 1-2-3 at the 24 Hours of Le Mans endurance race. The new car is expected to exhibit one of the best power-to-weight ratios of any production car, which should make it an excellent choice for the track. Rear wheel-drive, mid-mounted engine, sexy styling — what more could you ask for in your own personal race car? One thing missing in Ford’s announcement is the number of cupholders in the cockpit. We Americans DO love our hot and cold drinks while on the road! Oh well. Although Ford hasn’t announced pricing yet... really now. If you have to ask... You can read Ford’s GT press release here: https://media.ford.com/content/fordmedia/fna/us/en/news/2015/01/12/ford-redefines-innovation-with-gt-supercar.html ### Jim Corbran, Automotive columnist for Artvoice Read You Auto Know every other week in Artvoice, and check the YAK blog daily here: http://blogs.artvoice.com/avdaily/category/you-auto-know/ The post AN AMERICAN SUPERCAR appeared first on Buffalo Cars.