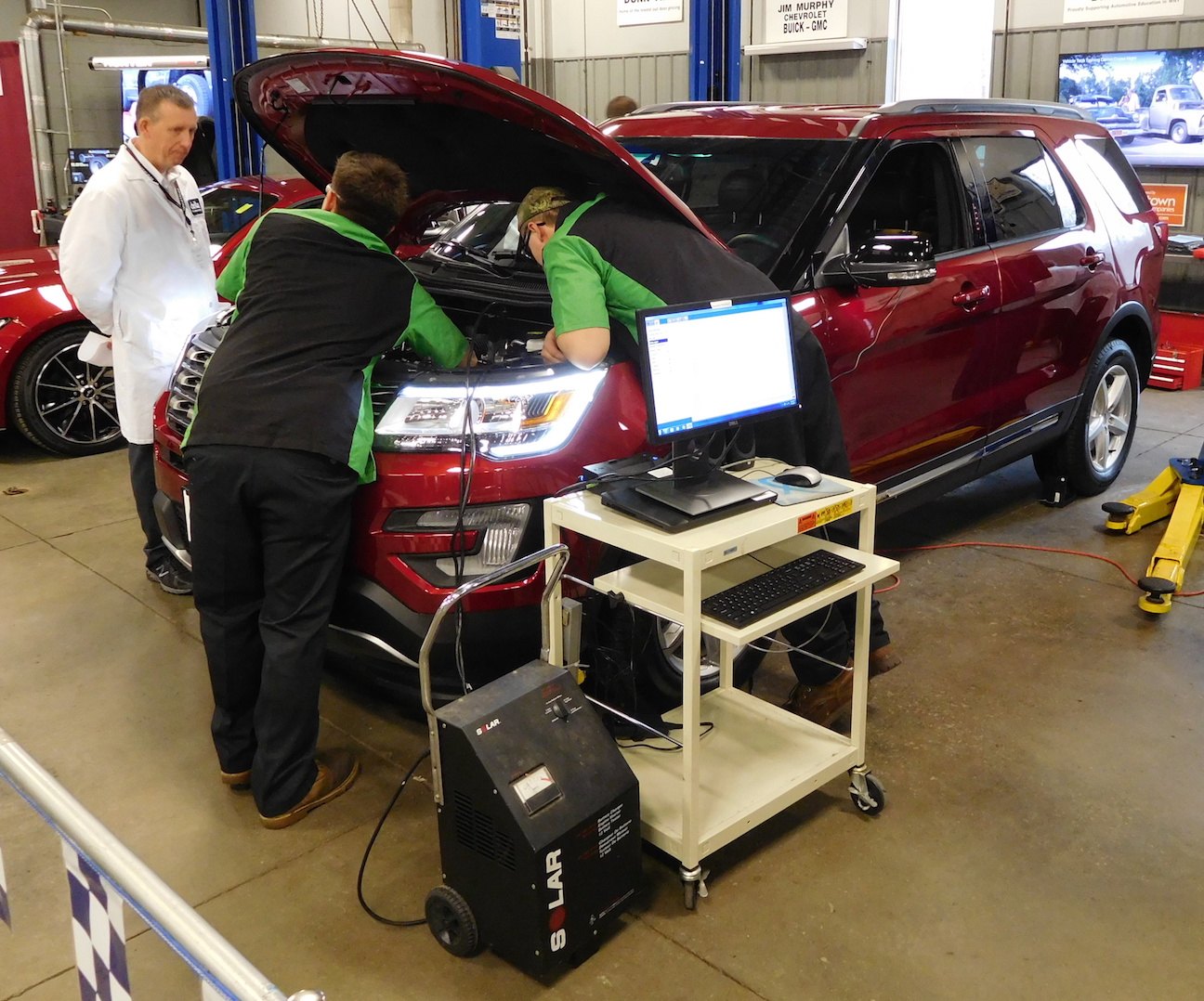 This past Saturday I had the privilege of attending the 26th annual competition for local high school automotive tech students, as they tried to solve a series of “planted bugs” in a group of new vehicles, with the students’ goal being not only to get the vehicle started, but to do it following a set of procedures while being closely monitored (and mentored) by a group of area dealership service department techs and managers. Working in teams of two, they each had two hours to diagnose and take care of the problem(s), with sessions is the morning and afternoon.


The annual competition is organized by the Niagara Frontier Automobile Dealers Association (NFADA), and is hosted by Erie Community College (ECC) at their Vehicle Technology Training Center (VTTC) in Orchard Park. This year’s vehicle sponsor was the Ford Motor Company, and a number of local automotive industry and other concerns contributed vehicles, manpower, and equipment to facilitate the competition. The main event (above) is for high school seniors, while juniors in the auto tech program take part in the Tire Changing Rodeo (right), a timed competition which in the past has led to a majority of them returning the following year for the senior competition. There is also a written portion of the competition for both juniors and seniors. Winners of the seniors competition, their families, and their instructor, are taken to New York City during New York Auto Show week to take part in a national competition at the Javits Center.

To the uneducated observer (a.k.a. — me) this might all seem like a simple task. After all, these days you hook up a machine to a car’s computer, turn the key and it tells you what the problem is. Not so fast, grasshopper! Although it probably happens that some students might have an inkling what the problem is, the point of the competition is to show that you can follow procedures — to the letter. Things need to be done in an orderly (and obviously, timely) fashion.

As was pointed out by many speakers during the awards ceremony at the end of the day, today’s auto repairers are not merely mechanics, but rather automotive technicians. Gone are the days when you’d pull your car into the garage and change the points, plugs, and condenser and be on your way. With all of the sophisticated electronics and computerized systems under the hoods and dashboards of modern vehicles, today’s students are learning about stuff that didn’t even exist when their parents were in high school — and, as was also pointed out, they’ll be learning for the rest of their careers just to keep up!

For any high school-age student out there wondering about a career choice, there’s more out there than jobs for software writers, financial wizards, and overpaid dog-walkers. Automotive Technology is a highly-skilled, well-paying career choice. And as Mark Hoeber, who is the Academic Dean for Engineering & Technology Business at ECC, told me, not all of the jobs out there are necessarily in vehicle repair. “It also crosses over into other businesses, as companies in HVAC, the public utilities like National Fuel, and manufacturers such as Moog, are eager for students who’ve been disciplined in the auto tech programs.” And as several auto dealers in attendance also pointed out, there are opportunities to advance from the dealership tech position to other, managerial positions.

Tom Kalman, a 2011 graduate of Grand Island High School and winner of the competition in his senior year, knows what these kids were going through on Saturday. “The electronics these days are insane, and some of this stuff may be way over their heads, but they’ll remember this, and in the long run it will only help them,” he told me. It certainly didn’t hurt Kalman, who is currently the lead tech at Fucillo Hyundai on Grand Island.

One parent I spoke with, Dean Schilling, had a son Kyle in the seniors competition. The Schilling family operates D&D Acres, a farm in Cowlesville, and Mr. Schilling told me that Kyle (and his twin brother Ethan — who is a student in the Diesel Mechanics Program) are already skilled mechanics on the farm. Both attend Iroquois Central and are enrolled in the W.D. Ormsby B.O.C.E.S. Educational Center in East Aurora. “I never pushed him into any career choice,” Kyle’s dad told me, “he just took to it.” Kyle, and his Ormsby partner Marissa Folts (right), finished in second place in the seniors competition. First place went to Daniel Hudson and Jeff Kassman from the Kenton Career & Tech Center in Tonawanda (below, pictured with NFADA president Paul Stasiak, and their instructor, Gary Willis), while in third place were Dawson Heft and Zachary Shaffer from West Seneca’s Potter Road Career & Tech Center. The Tire Changing Rodeo was won by Johnny Thwang and Gabe Ponce from Kenton.

The NFADA, which was founded in 1903, works hard throughout the year organizing the tech competition. It’s probably most visible to the general public during the annual Auto Show, but it also works behind the scenes serving area auto dealers throughout the year. Its Charitable Foundation works to award scholarship money to some of the tech competition students; over $650,000 has been granted to students and to a number of local organizations since being founded in 1999. ECC’s VTTC opened in 1996 on Big Tree Road in Orchard Park in a former car dealership building, and it offers a two-year Associate’s Degree program in Automotive Technology. In addition, Ford (through its ASSET Option) and Fiat Chrysler (through the Mopar CAP option), also have on-site, manufacturer-sanctioned two-year A.A.S. programs.

With all of the (correctly placed) emphasis on education these days, it’s good to know that some energy is being expended on the trades. Right now, with the number of retiring baby boomers leaving the workforce, it’s a great time to look into the trades, especially in the automotive tech area, as a satisfying and lucrative career path.