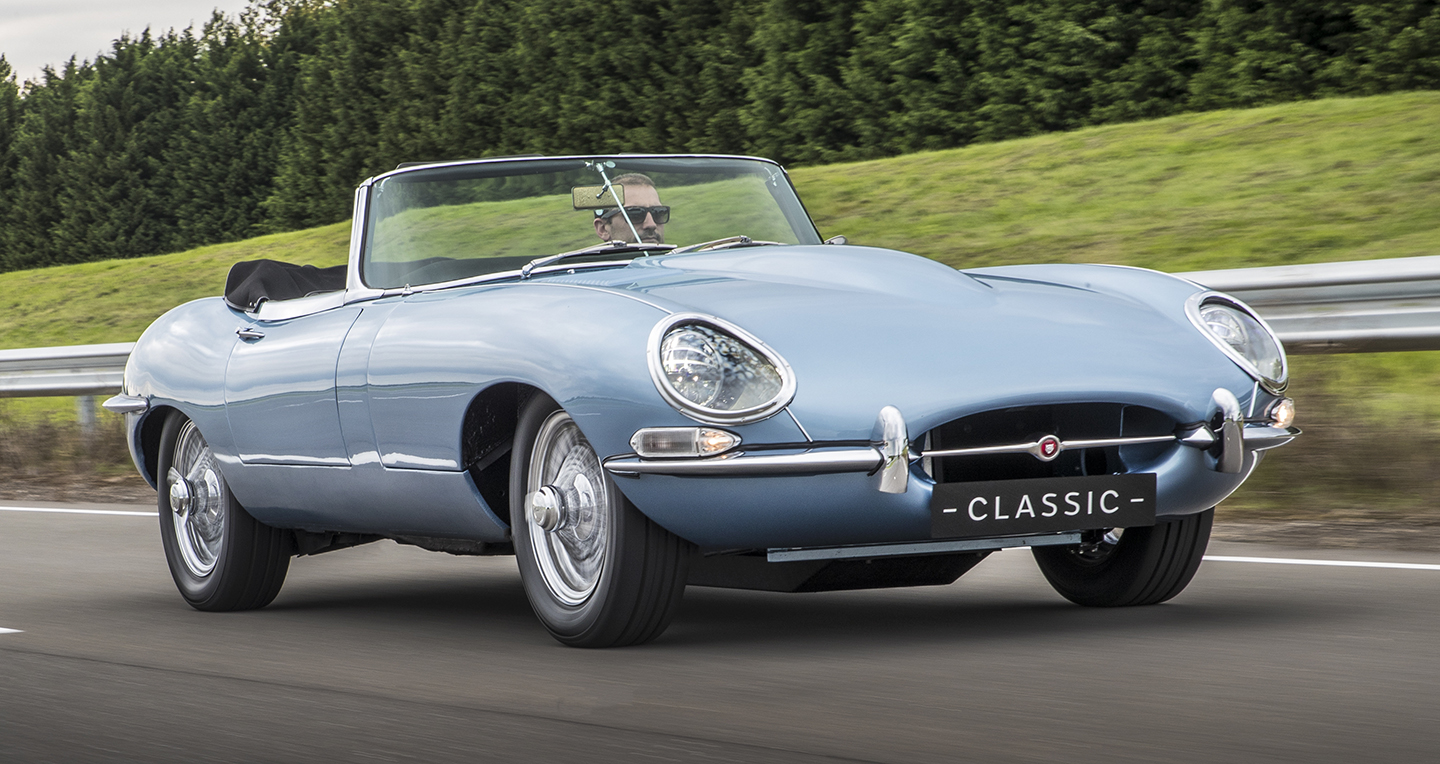 THE QUIETEST E-TYPE IN EXISTENCE Many of you have probably heard of the newest iteration of the Tesla Roadster — Elon Musk’s long-awaited second-generation all-electric sports car. And we’re not pooh-poohing the new Roadster here, just pointing out another all-electric two-seat drop-top whose announcement a while back you may have missed.

We’re talking about the one-of-a-kind (for now) Jaguar E-type Zero.

The Jaguar Land Rover folks took an actual old 1968 E-type Series 1.5 Roadster, restored it to an original spec car (aside from the drivetrain), and dropped in a 220kW electric powertrain from the present day. Jaguar tells us that the lithium battery pack has the same dimensions, and similar weight, to the original XK straight six-cylinder engine of the E-type. The electric motor is located just behind the battery pack, where the original transmission was located. It results in about a 100-lb weight reduction from that of the original car.

This means that underneath, the E-type Zero, with the same suspension and brake setup of the original car, hasn’t changed much, if at all. And the front/rear weight distribution is also still the same.

Some updates to the car have occurred. The dashboard instruments have been changed to a set of electronic readouts, to give the driver a better idea of what’s going on with the 21st-century powertrain; the petrol-filler door has been modified to contain the Zero’s recharging socket; a pair of LED headlights now occupy the space formerly holding a pair of 1960s-era headlights (and you can barely notice the difference — until, of course, you flip them on at night); a rotary gear selector was borrowed from a present-day Jaguar; and naturally there’s a noted absence of the twin tailpipes poking out of the car’s svelte rear end.

Driving.ca, who took a ride in the E-type Zero, tell us it “…drives, steers, and handles like an E-type.” — it just doesn’t sound like one. They also tell us that, because of the way the powerplant conversion was done, the original engine/transmission could easily be re-installed into the car should any potential new owner feel the urge to do so.

British GQ, who also had a ride in the Zero, reported it feeling downright spooky, what with the absence of “cough and splutter” often associated with driving a 50-year-old car. They also told us that Jaguar is claiming a range of 168 miles on a full charge, along with a zero-to-60 time of 5.5 seconds. A full recharge is expected to take from six-to-seven hours.

At what cost does all of this gee-whiz technology come? British GQ tells us the conversion cost around £300,000 (about $476,000). This doesn’t seem to include the cost of the donor car, so it’s not likely we’ll be seeing a lot of E-type Zeroes on the road anytime soon.

But I expect someone out there will take the plunge…