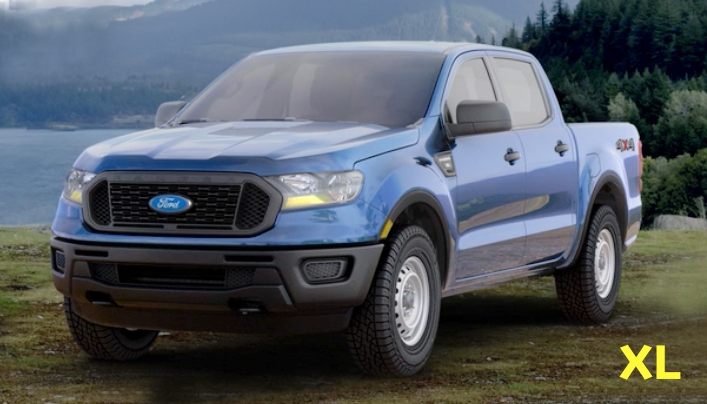 A couple of weeks ago we featured a what if pickup shown by Volkswagen at this year’s New York Auto Show. Today we have a for real upcoming entry into the already crowded pickup truck segment, Ford’s reincarnation, if you will, of it’s mid-sized Ranger pickup. We say reincarnation because Ford has been selling a version of its Ranger pickup in other markets for years. I’m not sure what the thinking has been which shut out the North American market all this time.

Production is expected to begin late this year for introduction in the 2019 model year. No surprises that a list of the number of different versions offered will be longer than your arm. Entry-level XL, mid-level XLT, and high-level Lariat trims will be offered in SuperCab (two-door extended cab) and CrewCab (four-door) variations. Chrome and Sport appearance packages will be offered for all, as well as FX Off-Road packages in both FX2 (RWD) and FX4 (4WD) versions, both of which will include increased ground clearance, more aggressive tires, and an electronically locking rear differential.

Power will come from Ford’s 2.3L EcoBoost four-cylinder engine, connected to a ten-speed automatic transmission. Rear-wheel-drive will be standard, with four-wheel-drive being the optional choice.

Automatic emergency braking will be standard on all new Rangers, while the upper level XLT and Lariat models will also have lane keeping assist, lane departure warning, reverse sensing system, and blind spot information system with trailer coverage as standard. Ford’s SYNC®3 system will be offered, featuring Apple CarPlay and Android Auto compatibility, Ford+Alexa personal assistant functionality, and optional navigation. On the outside, Ford is offering optional LED head- and taillamps, along with puddle lamps and lighting for the cargo bed.

Performance enthusiasts have been somewhat encouraged by the recent introduction of the Ranger Raptor in the Asia-Pacific market. The Raptor is equipped with a 2.oL turbo-diesel, BF Goodrich all-terrain tires, and upgraded suspension parts meant for serious off-roading. Oh, and of course the nifty-looking Raptor exterior bits which help it identify with its larger F-150 Raptor brethren. For the moment, Ford is not committing the Ranger Raptor to the North American market. But, they also held off for an eternity to committing to bring any form of the new Ranger to our shores, so, stay tuned.

With Ford’s experience in leading the pickup truck sales race for decades, it’s hard to imagine the new Ranger not being a huge hit — especially seeing that the mere size of today’s full-sized trucks like the F-150, Chevy’s Silverado, and Fiat Chrysler’s Ram means they’re getting too big to fit in many garages.

The new Rangers for the North American market will be built in Ford’s Michigan assembly plant. We’re looking forward to seeing one in person.