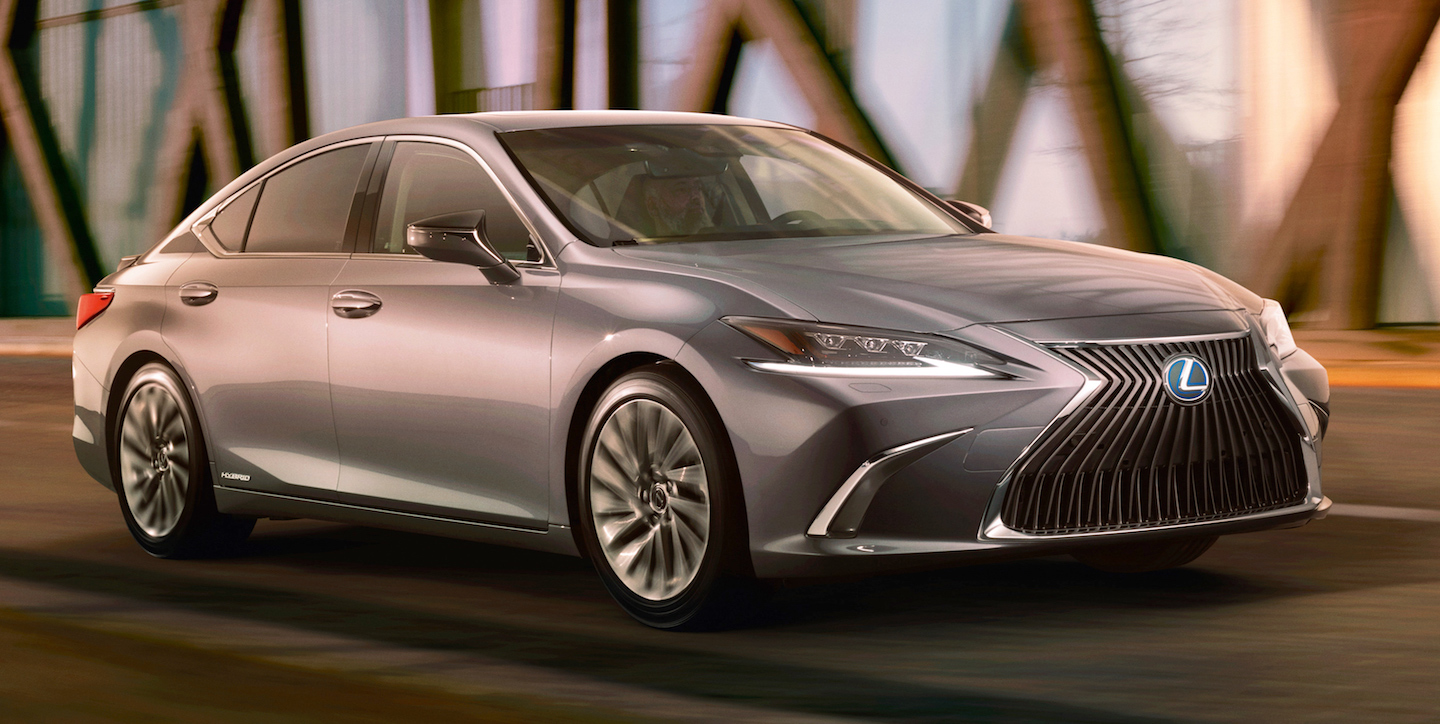 Okay, I’ll admit to really not liking the Lexus grille which has pretty much graced every Lexus, except for the large SUVs, for the past few years. To me some of them look like electric shavers (the LS sedan), and some of them look like… well, smaller electric shavers (LC hybrid). But as they say, time heals all wounds, and as more sand slips through the hourglass, the more I’ve come to almost like the front ends of most Lexuses (Lexi?).


This week for your perusal we have the just-announced 2019 Lexus ES sedan, which Lexus is billing as “A new level of performance and sophistication.”

Unveiled last week in Beijing (which is quickly becoming the car capital of the world), the new ES is the seventh generation of Toyota’s luxury brand’s entry-level sedan. Lexus also tells us that the new ES is the third vehicle in the Future Chapter of Lexus that started with the LC coupe and LS sedan, which they feel “…traditional buyers will find more spacious, quieter and safer than ever before.” I’m not sure what the non-traditional buyers (maybe, like me?) will think of the new ES, but I’ll bet it’s w-a-y nicer than my 2005 Ford Focus SES.

Seeing that automotive industry copywriters often seem to enjoy really flowery language when describing their products, I’m not going to even try to convey the style of the new ES — here’s the official take on its frontal area: “To create a dynamic yet fluid shape, Kaijino’s team used the low hood enabled by the new ES platform to produce a distinctive silhouette emphasized by an aggressive downward slant.” (For the record, Kajino is the ES Project Chief Designer.) I can’t believe there’s no mention of an electric shaver anywhere in that description. The ES 350 and the ES 300h (a hybrid variant) use one grille design — “elegant vertical bars which radiate out from the center,” Lexus tells us, while the ES 350 Sport has a “blacked-out pattern consisting of L-shaped clusters with corresponding cut outs in each corner of the facia.” Otherwise known as “fancy electric shaver heads." (see above)

It’s not all about the front end. The new ES has a more sloped roofline, there are three different wheel designs, and buyers have 12 color choices — including an interesting-sounding Sunlit Green which again, quoting here “replicates the color of ocean water brightened by the sun.” I’m kinda looking forward to seeing that one in person.

Inside, a new rear seat design is said to preserve the previous model’s headroom even with the new fastback roofline. Hadori trim on the Sport model is inspired by the design of a traditional Japanese sword and it features fluctuating wave patterns to give it a three-dimensional look. Other ES models will continue with wood trims in hues such as Bamboo, Espresso, and Dark Mocha.

The 2019 ES will be powered by a 3.5L V6 rated at 302 hp, connected to an eight-speed direct-shift automatic transmission. Hybrid models will have a 2.5L four along with an electric motor which combine for 215 total hp.

Expect the new Lexus ES to hit showrooms this fall.