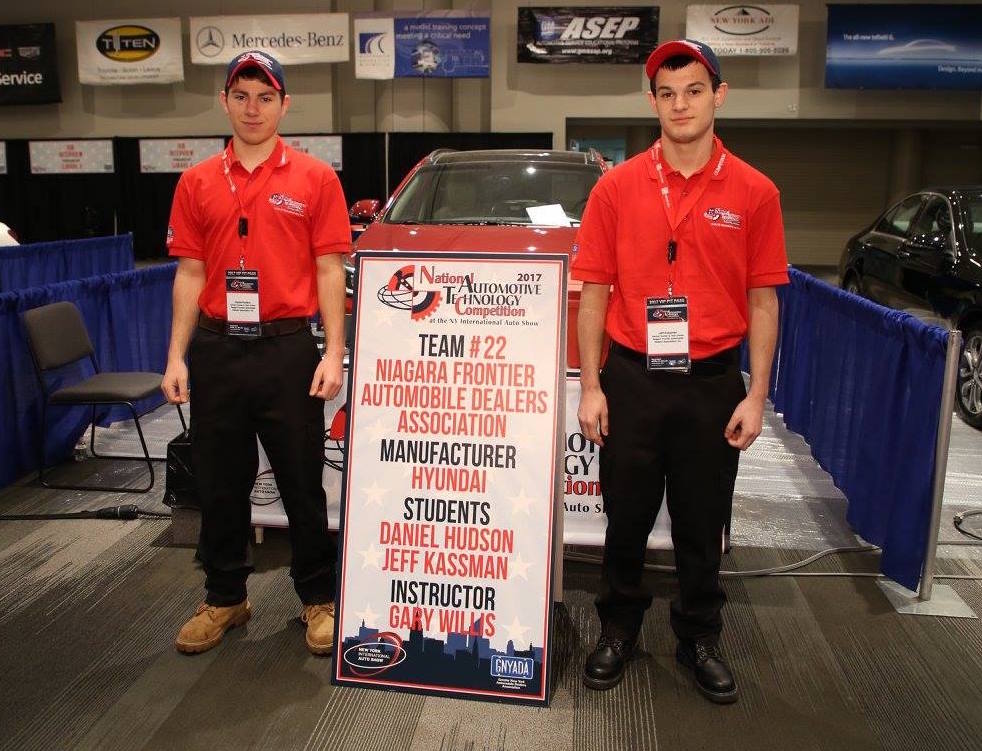 Two seniors in the automotive technology program at the Kenton Career & Tech Center traveled to New York City last month to take part in the National Automotive Technology Competition, which is held annually in conjunction with the New York International Auto Show at the Jacob Javits Convention Center. Tonawanda residents Jeffrey Kassman and Daniel Hudson traveled to New York with their Kenton instructor Gary Willis (seen at right). Kassman and Hudson, as winners of the Ron Smith Memorial Auto Tech Competition held at Erie Community College this past January, were sent to the national competition by the Niagara Frontier Automobile Dealers Association (NFADA), local sponsors of the contest. All regional contests are sponsored by their local National Automobile Dealers Associations (NADA), with the winners moving on to NYC for the nationals.

The competition was started in 1993 by the Greater New York Automobile Dealers Association to help curb the emerging shortage of automotive technicians. The national contest is a two-day affair, held during New York’s prestigious auto show. It consists of two three-hour sessions, spread over two days: Day One with the students showing-off their knowledge of tools and instruments; and Day Two illustrating their repair skills as they’re presented with a vehicle which has been modified to a “no-start, no-crank” condition. It’s their job to get the cars running, following a series of carefully monitored diagnostic procedures. It is billed as “a test of skill, a measure of knowledge, and a race against the clock — all rolled into one.” At the end of the day, it’s less important that you manage to get the vehicle running than it is to follow the set of proscribed procedures. There’s no jumping-in and taking a stab at what you think the problem might be. In this regard the Kenton team’s instructor, Mr. Willis, remarked that his team was among the best-prepared on the competition floor.Thirty teams from the U.S. and Canada took place in the 2017 competition. The first three-hour day was spent at a series of workstations which tested their knowledge of tools, measuring instruments, specific vehicle components (including HVAC, electrical, compression testing, and wheel alignment), as well as their job interview skills. This all accounted for 60% of the team’s total score. The next day the teams had three hours for the On-Car Challenge. They were given fixed amounts of time to diagnose and repair a number of pre-assigned problems with their particular car. Each team was given a work order with “customer complaints” outlined. Computers were used to help diagnose problems, but it was the students’ knowledge of available tools, and their vehicular knowledge in general, which helped them navigate through their punchlist. Being proficient in the world of computers is just as important these days as succeeding at the hands-on mechanical end of car repair. During the On-Car Challenge, each correctly repaired bug was worth a set number of points depending on its degree of difficulty. This portion of the competition accounted for the remaining 40% of the team’s point total.

Getting ready for the competition consisted of more than just classroom time at Kenton, not to downplay the school’s part. Both Hudson and Kassman took part in hands-on internships at Northtown Subaru-Hyundai in Amherst, which gave them real-world experience and was a great help in their preparation for the national competition. Both of the team members acknowledged that, as tough as the local competition was, the pressure in New York City was much greater. Of course, the stakes were pretty large, with the eventual winners, John Deluca and Evan Wagner of the H.B. Ward Technical Center High School in Riverhead, New York, both sharing part of the treasure trove of full- and partial-scholarships (including full tuition to the Lincoln Technical Institute). Finishing in first place (out of nine teams) in the local contest, and ninth (out of thirty) in the national contest is a giant feather in the caps of the Kenton students, their instructors, and their mentors, and can’t help but be standout items on their resumés when they’re ready to hit the job market. That will be a bit down the road yet for these two Kenton seniors, as they’re both heading off to college in the fall with the help of some well-deserved scholarships: Jeffey Kassman will be attending Erie Community College, where he’s been accepted into the Mopar Career Automotive Program (Mopar CAP), which combines classroom instruction with hands-on experience at a local Chrysler dealership. Daniel Hudson will be heading for the Southern Tier, where he’ll be studying to be a diesel technician at Alfred State, which has the only program in New York/New England approved by the Association of Diesel Specialists.

It’s good to know that there are still students out there interested in the trades. They’re well-paying (and much needed) jobs which will help insure the success of the next generation.

We just hope that these two gifted young mechanics enjoyed their involvement in the big city competition — working with probably the cleanest engines bays they’ll ever see again!