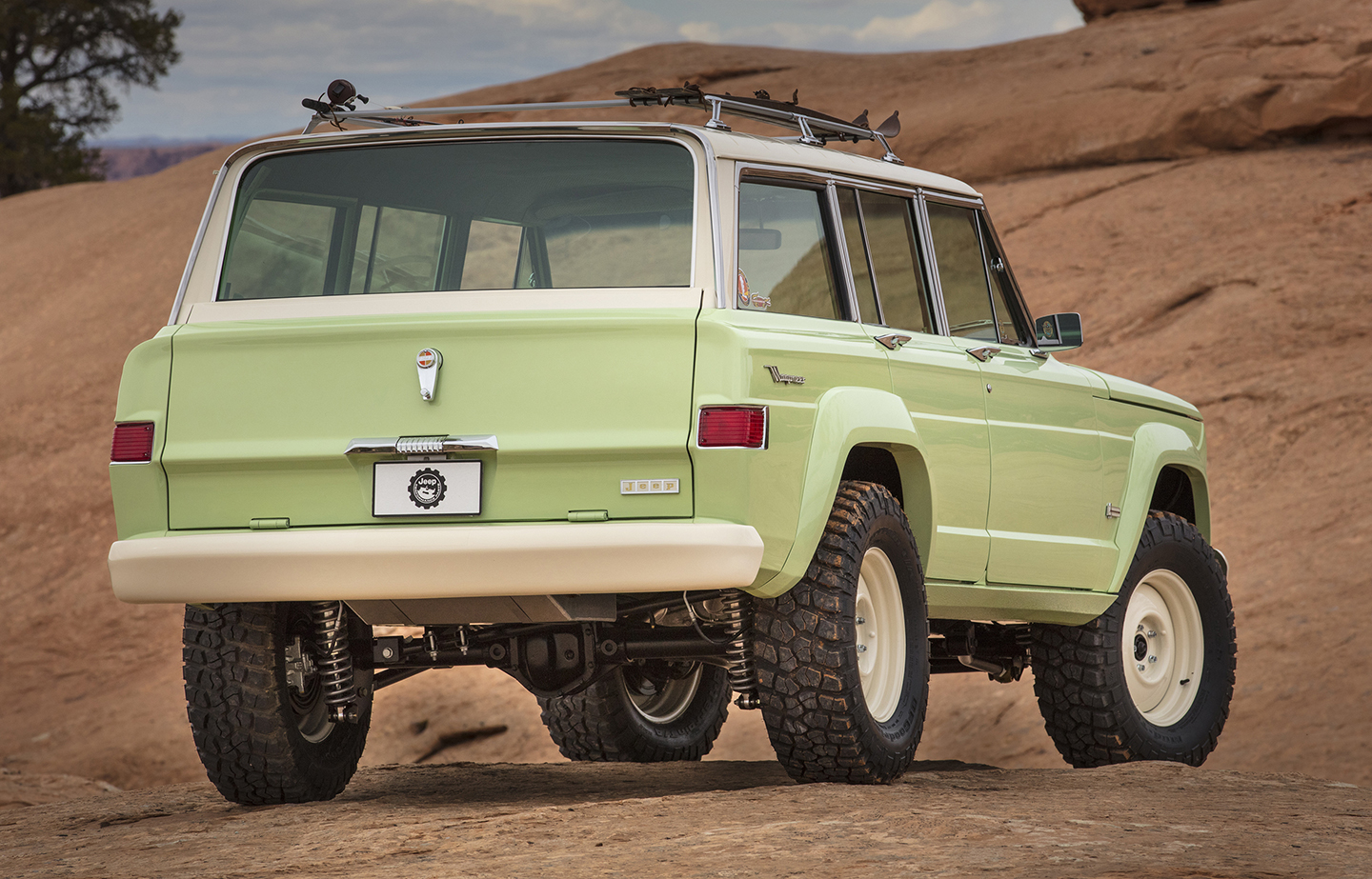 Those of us of a certain age remember when most family cars were either traditional sedans or station wagons. Okay, there were those radical Moms & Dads who drove convertibles, but they were the exception.

Then, in 1963, Jeep introduced the Wagoneer. It was a station wagon-ish vehicle with Jeep’s off-road underpinnings. Yes, I know, the Jeep station wagon had already been on sale since 1946, built by Willys, and then by Kaiser & Kaiser-Jeep. But it was mostly an enlarged and enclosed Jeep, which probably had great appeal to ex-GIs, whereas the Wagoneer looked much more like something any family would buy.

Fast-forward to this past spring, when FiatChrysler unveiled seven concept vehicles for the 52nd Annual Moab Easter Jeep Safari, an event for Jeep aficionados held each year in Moab, Utah. Among the different iterations of Wrangler-based off-road machine concepts (and a lone Renegade — the B-ute), was the refreshed 1965 Jeep Wagoneer which you see here.

The Jeep folks tell us this one has its original steel body, modified to accommodate the Roadtrip’s five-inch longer wheelbase and wider track. The frame has been updated to a boxed and reinforced unit, with Dana front and rear axles, and a four-link suspension with coilover springs; inside the reshaped wheel wells is a set of 17-inch steel wheels wearing 33-inch BF Goodrich Mud-Terrain tires.

Inside are the original bench seats and door cards, covered in Oxblood-colored leather. Overhead is a wicker headliner, and underfoot is a bedliner-sprayed floor painted to match the exterior’s Parkway Green paint job. Back in the cargo area sits a custom-made tool box, which was made from the valve cover of this Wagoneer’s original 230 cu. in. OHC-6 engine. Taking its place under the hood is a modern-day 5.7L V-8 which is connected to a four-speed automatic transmission.

Back in 1965, the standard Wagoneer was available as a two- or four-door model, with either two- or four-wheel-drive. This was the first year that buyers could order the American Motors-made 327 cu. in. V-8, which came with a General Motors Turbo Hydra-Matic transmission. The following year an über-luxe Super Wagoneer was introduced, paving the way for many of today’s full-sized luxury SUVs.

Of course, the Roadtrip is nothing more than a concept vehicle. And it’s certainly not likely to ever be produced. But it’s nice to see Jeep updating a page from its history books. If they’re interested, I have a short list of other old Jeeps I’d like to see get a makeover: Gladiator pickup, Fleetvan delivery vehicle, and the line of Forward Control trucks, for starters.