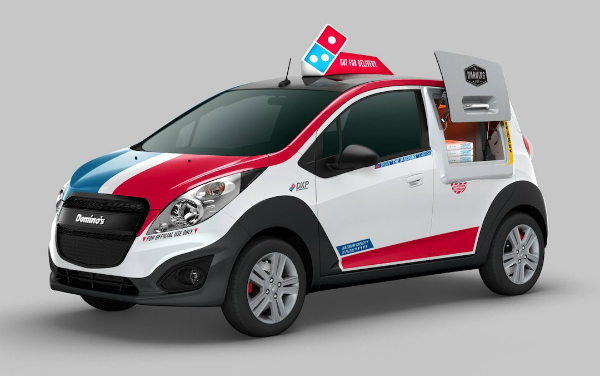 DOMINO’S PIZZA SPARK by Jim Corbran, Automotive Columnist Domino’s Pizza just announced that they’ll be purchasing 100 2015 Chevy Sparks to function as their new Domino’s DXP™ (Delivery Expert) — a specially designed and built pizza delivery vehicle. You may think of the Spark as the smallest car Chevy sells in North America, and even though that’s true, the DXP will manage to contain not only a warming oven (with an accessible opening on the driver’s side), but enough space to carry 80 pizzas on board! Not only will the Spark have a very efficiently laid out interior space, but expect it to also be stingy on fuel and easy to park. It was designed using ideas gathered from Domino’s Ultimate Delivery Vehicle Project, a contest which garnered 385 entries and which had a first place prize of $10,000. Being an out-of-the-ordinary vehicle, Chevrolet dealers in areas getting the DXP Sparks will be given special training to meet the needs of the fleet. The first cars are expected to hit the streets sometime this month. No word yet as to whether any will be seen in WNY. ### The post DOMINO’S PIZZA SPARK appeared first on Buffalo Cars.