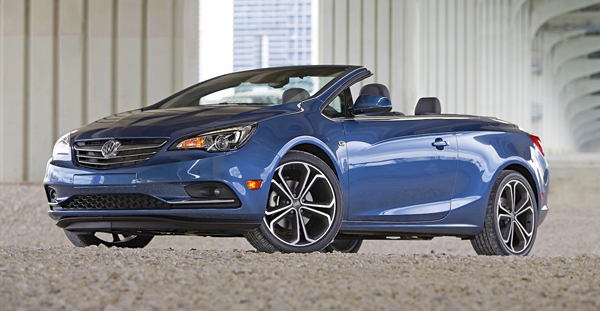 DROPPIN’ ZE TOPPIN’ — BUICK’S NEWEST CONVERTIBLE by Jim Corbran, Automotive Columnist Not since the Reatta said good-bye in 1991 has GM’s Tri-Shield brand offered a drop top model. And not since the 1985 Riviera has there been a factory-built Buick convertible with a back seat. Until now. Enter the 2016 Buick Cascada, a new mid-size(ish) soft-top which comes to the North American market courtesy of GM’s German Opel subsidiary, via — are you ready? — the General’s Opel production plant in Gliwice, Poland. Got all that? Looking at the Cascada one might assume it’s a convertible version of the Regal (another Opel clone), but the Cascada’s kissing cousin is actually Buick’s Verano, although they share neither body panels, nor a wheelbase. Buick tells us the Cascada offers comfortable room for four adults. It’s powered by a 200-hp, 1.6L turbocharged engine connected to a six-speed automatic transmission. The top can be lowered in just 17 seconds, even while driving at speeds up to 31 mph. (If you don’t have time to pull over to lower the top, you need to rearrange your priorities.) Standard features include a rear vision camera, remote starter, heated front seats and steering wheel (for all-weather top-down driving!), 20-inch aluminum wheels, and a bunch of other stuff you’d expect with an MSRP starting at $33,990. Read all about the Cascada, see more photos, and build your own right here. ### The post DROPPIN’ ZE TOPPIN’ — BUICK’S NEWEST CONVERTIBLE appeared first on Buffalo Cars.