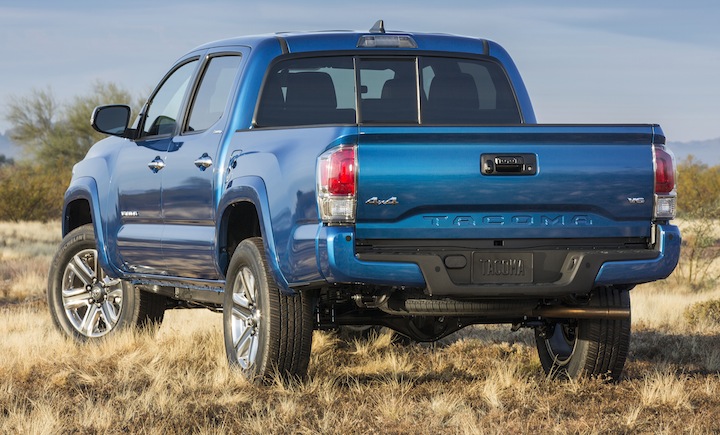 GARAGE-SIZED PICKUPS by Jim Corbran, Automotive Columnist Gas prices may be dropping, and sales of bigger vehicles may be on the rise again, but that hasn’t stopped manufacturers from reinventing the mid-sized pickup truck. Again. GM is selling new Chevy Colorados and GMC Canyons, and now Toyota has announced a new (after ten years!) Tacoma, fully redesigned with some new and some carryover powertrains. The base model will still have the 2.7L four, with a five-speed manual (automatic optional); while a new-to-the-Tacoma 3.5L V-6 will be available, along with a six-speed automatic or manual transmission. Styling has been completely overhauled, but is still very recognizable as a Toyota. A TRD Off-Road version is still available (Really? They’re sticking with TRD? Were English-speaking people involved in that naming choice? - Lol). TRD of course, OF COURSE — stands for Toyota Racing Development, and adds such goodies to the four wheel-drive truck such as limited slip, 16 inch wheels, multi-terrain select switch, crawl control, windshield camera mount... all inspired by 35 years of desert racing. Toyota says that over 40 percent of Tacomas sold are TRDs, so you can imagine a lot of time went into the new model. Should be a hit when it appears for the 2016 model year. Being a cheapskate, I can’t wait to see the base model. ### Jim Corbran, Automotive columnist for Artvoice Read You Auto Know every other week in Artvoice, and check the YAK blog daily here: http://blogs.artvoice.com/avdaily/category/you-auto-know/ The post GARAGE-SIZED PICKUPS appeared first on Buffalo Cars.