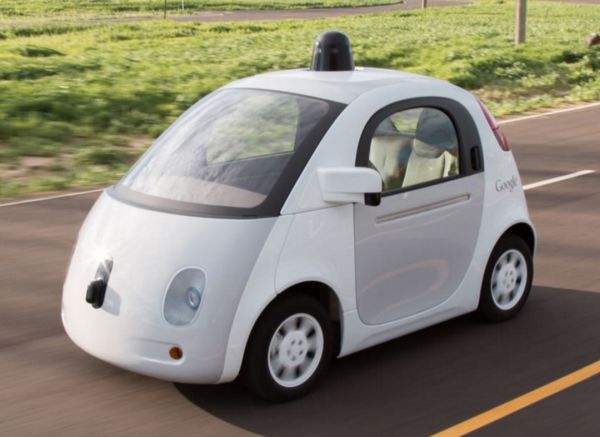 JUST DRIVE, SHE SAID by Jim Corbran, Automotive Columnist And when she said that (“she” being either the car highjacker in the 1992 Richard Paul Russo short story Just Drive, She Said, or the backseat cab fare in Stan Ridgeway’s 1986 song Drive, She Said), I highly doubt she was talking to the car. I realize that time marches on, but I personally have zero interest in cars that drive themselves, a.k.a. autonomous cars, which the always spot-on Wikipedia defines thusly: “An autonomous car (driverless car, self-driving car, robotic car) is a vehicle that is capable of sensing its environment and navigating without human input. Autonomous vehicles feel their surroundings with such techniques as radar, lidar, GPS, Odometry, and computer vision.” Ugh. What’s the fun in that? Besides the fact that I had to look up the term lidar (a combination of the words light and radar) which is seemingly (I have my doubts) a detection system that works on the principle of radar but uses light from a laser, part of the fun of going somewhere in the car is the driving part. I’m a fidgety passenger whenever there’s another human at the controls; I can’t imagine trusting the likes of automobile manufacturers to get me where I’m going. As a kid I didn’t have too much trouble with the old NFT bus slogan “Leave the driving to us!” but am somewhat leery of putting my life in the hands of an industry for which safety recalls are now the norm rather than the exception. I’ll sit back and watch as my days play out. You’ll have to pry my cold, boney hands from my steering wheel just before lowering me into my final parking spot. I do, however, hope to live long enough to see the first mega-lawsuit stemming from the first serious accident involving a driverless car. I’ll be the guy in the back of the courtroom. Laughing my ass off. ### The post JUST DRIVE, SHE SAID appeared first on Buffalo Cars.