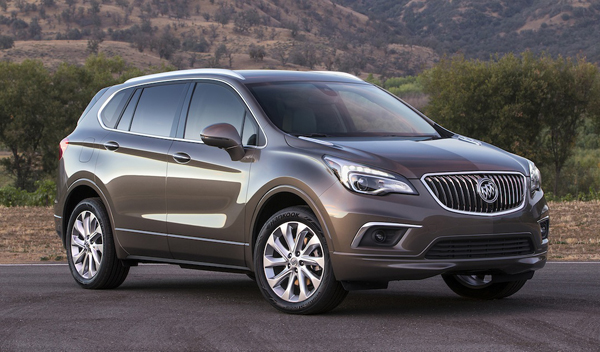 MADE IN… WHERE? by Jim Corbran, Automotive Columnist If you’re thinking that the photo looks like a Buick Enclave that’s a little… off, you’re pretty close. Think of it as an Enclave that shrunk in the laundry. It’s Buick’s new entry in the midsize crossover category, and it’s the venerable old Flint, Michigan automobile manufacturer’s first — are you ready for it? — Chinese import. Come to think of it, it’s the first major mass-produced Chinese vehicle to be imported to the U.S., period. How did this happen, you may ask. It’s quite simple. If we go back a few years to when General Motors was dropping car divisions like fly balls at my old Little League games, Buick was spared the axe due mainly to its huge presence in China, where vehicles wearing the Tri-Shield sell like hotcakes. They sell more Buicks in China than they do in North America, so GM would have been nuts to drop the nameplate. The Envision has been on sale in China for over a year now, and Buick, seeing the need to fill a gap in their lineup, figured it was quicker to export them from China than to retool a North American plant and start from scratch. And once people get over the shock of its origin, I imagine it will do well. It’s not like people in the U.S. are averse to buying anything made in China. It happens billions of times a year. The Envision hits all of the hot points for this category, including a 2.0L turbocharged engine with start/stop technology, a sliding 60/40 rear seat offering more flexibility for rear seat passengers, power liftgate, push button/remote start, Bose sound system… you get the idea. Available, as Buick tells us, in the second quarter of this year, I would imagine there’ll be one (or two) at the upcoming Buffalo Auto Show, which runs from Feb. 11-14. Until then… See more here: Buick Envision ### The post MADE IN… WHERE? appeared first on Buffalo Cars.