NEW MALIBU ON THE HORIZON 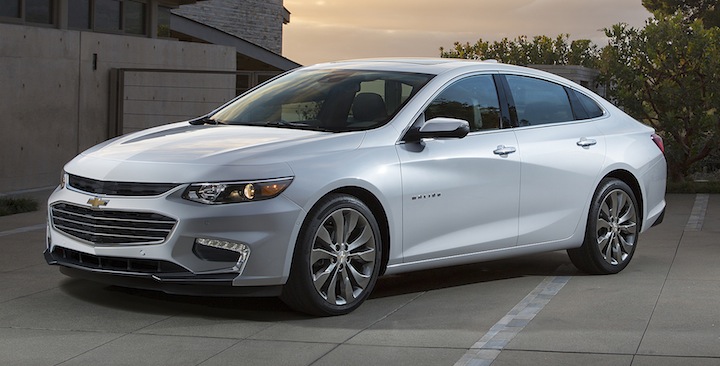 NEW MALIBU ON THE HORIZON by Jim Corbran, Automotive C olumnist One of the complaints about the current Chevy Malibu is its interior space, as the back seat suffers a bit in comparison to its competitors. Malibu shoppers, Chevrolet had heard your tales of woe: the new and improved 2016 Malibu will feature a four inch longer wheelbase and increased rear seat leg room. This roomier interior will come wrapped in a completely redesigned exterior, heavily influenced by the larger Impala. While its shape is a definite improvement over the current model, I find the front end styling a bit busy with its various opening sizes and protruding underbite. Rear styling shows the strong Impala influence but seems to be sitting a bit high at the very end. The heavily sloped rear window might pose a vision problem, especially for shorter drivers, but that seems to be the case with a lot of cars these days. Still, and improvement. An all-new 1.5L, 160 hp four-cylinder Ecotec turbo will be standard in the new Malibu, which GM is estimating will return 27 mpg in city driving with a six-speed automatic. An optional 2.0L turbo will be available (22/32 mpg city/highway), which will have GM’s new eight-speed automatic. Built in GM’s Fairfield, Kansas assembly plant, the new Malibu will be available as a Hybrid (45+ mpg), and L, LS, LT, and Premier models. Expect pricing to be announced as we get nearer to the car’s on-sale date later in the year. more info at: http://www.chevrolet.com/2016-malibu/ ### Jim Corbran, Automotive columnist for Artvoice Read You Auto Know every other week in Artvoice, and check the YAK blog daily here: http://blogs.artvoice.com/avdaily/category/you-auto-know/ The post NEW MALIBU ON THE HORIZON appeared first on Buffalo Cars.