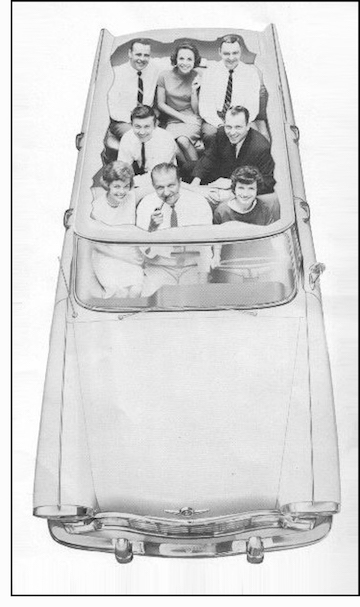 CLARENCE, N.Y. – The 1964 Checker Marathon was sold as both a taxi and a regular family sedan. They were of course pretty much the same car, save for some nicer appointments in the non-taxi models. I had to chuckle at the ad which showed how the sedan could hold eight people (there was also a station wagon version). They mentioned “…comfort, fit, stamina and value” in the ad (whose illustration is at the right), but left it up to the observer to determine if those eight people really were happy to be stuffed into the Marathon sedan. The woman in the rear seat is partially behind one of the guys seated next to her, while another woman next to the passenger side front door seems to be sitting somewhat sideways. “Are we THERE yet?!” Lol… Saw this nifty RealRide back in 2013, when it appeared on our Artvoice blog You Auto Know as a YAK Car Pic of the Day.