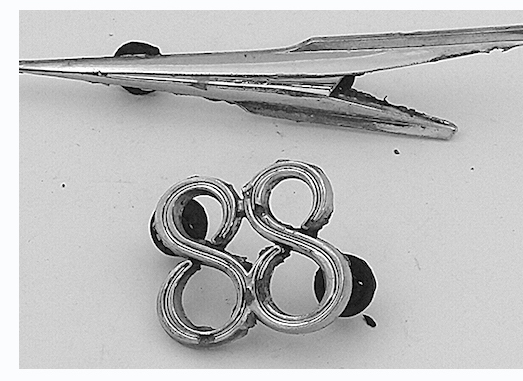 Checking over the photos of this 1962 Oldsmobile Dynamic 88 after returning home from this year’s Antique Automobile Club of America Car Show in Elma, I thought maybe the owner had left the keys or something sitting on top of the trunk lid. Upon closer inspection I realized it’s a Rocket 88 emblem. Hard to tell from the photos, so I found a set (it comes in two pieces) for sale on eBay (inset photo). The Dynamic 88 was Olds’ full-size entry-level nameplate, and it, along with the Super 88, had only two taillights while the pricier Starfire and Ninety-Eight lineups had four each. The station wagons however, marched to a totally different taillight drummer (bottom photo).