This 1964 Mercury Monterey Marauder four-door hardtop was what Mercury called “The Mercury with the impatient look.” It went on to say how “The slender, racy roofline of the Marauder is quite unlike any other car in its class—more youthful, more alive.” I’m not sure just how impatient the Marauder roofline looks, but it’s certainly sportier (IMO) than the reverse-window Breezeway roofline also offered for MY 1964 — check ‘em both out below. (Although I do like the idea of the Breezeway window, which lowers into the area behind the rear seat for added ventilation.) You’ve gotta love the Bittersweet paint job of today’s RealRide, which was seen at this year’s Quaker Days Car & MC Show in Orchard Park. 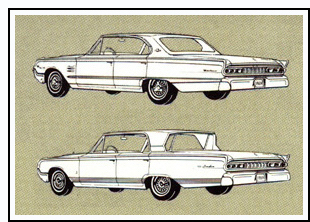