By the time this 1977 Oldsmobile Cutlass 4-4-2 hit the showrooms, it was more about style than substance. Introduced as Olds’ entry into the mid-sized muscle car genre back in MY 1964 as an option package available on any F-85 model except the station wagons, the original 4-4-2’s highlights were a 330cid V8 with 4-barrel carburetion, 4-on-the-floor, and 2 (dual) exhausts. By 1977 the standard powerplant was what Olds described as a “spunky 231 V6” connected to a five-speed manual transmission. Two different V8 engines were offered though, along with an automatic. This red example was seen a few years ago in North Tonawanda. And as Olds also mentioned to us, it had “No dainty pinstripes… instead, bold stripes and a special grille to complement that sleek fastback exterior.” 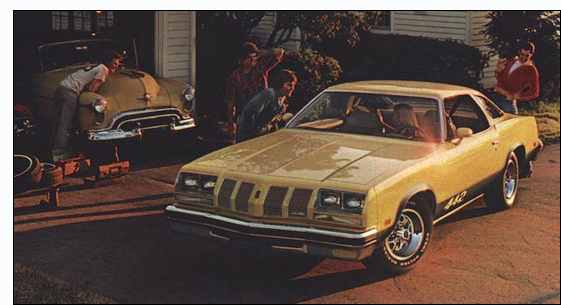