Now here’s a car you rarely see on the road anymore… a 1970 Dodge Monaco. This four-door hardtop model was the Monaco’s best-seller for MY 1970 (there was also a two-door hardtop, a four-door pillared sedan, and two wagons, in addition to the lower priced Polara lineup), and is painted a very 1970s Dark Green Metallic, which may or may not have coordinated with the owner’s kitchen appliances at the time, Lol. Two neat features of the ’70 Polara were the backup lights in the rear (see brochure illustration below), and the Super-Lite in the grille up front — a quartz-iodide driving light. (inset) We came across this rare RealRide back in 2012 in Hartland. 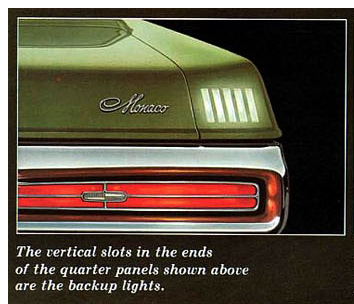