We came across this 1966 Chevrolet Corvair 500 Sport Sedan last summer while bicycling through the West Side of Buffalo. Sport Sedan was of course Chevy-speak for "four-door hardtop," and it was the only brand selling one in the American compact car class. The 1966 500 Sport Sedan is a pretty rare find these days, with just 8,779 of them leaving the factory; over 37,000 of the fancier Monza model were produced. This body style would stick around for just one more model year, as the final two years (1968 & 69) saw only the two-door hardtop and convertible being offered. Surprisingly (to me), in 1966 back-up lamps were still an extra-cost option (see the accessories brochure illustration below). 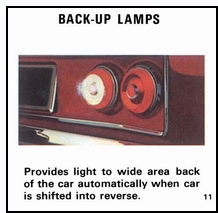