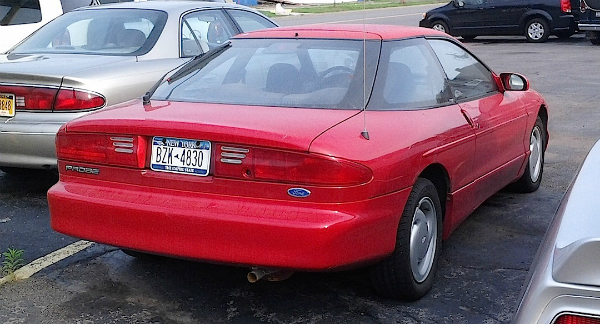 This 1993 Ford Probe really has the Ford corporate look from this view (we’ll forego the proctologist/Probe joke here in the interests of good taste — hmm, that reminds me of another Probe joke…). The Probe was a kissing cousin of the Mazda MX6, and they were built on the same assembly line in Flat Rock, Michigan for the North American market (all others were built in Japan). Ford’s front-wheel-drive coupe was sold from 1989-97. Some say the Mercury Cougar of 1999 was designed to be the third-generation Probe, but I can’t verify that. This red one was seen in Niagara Falls over the summer. Jim Corbran, RRofWNY …and check out our Facebook page: Non-American Classic Cars The post RealRides Of WNY appeared first on Buffalo Cars.