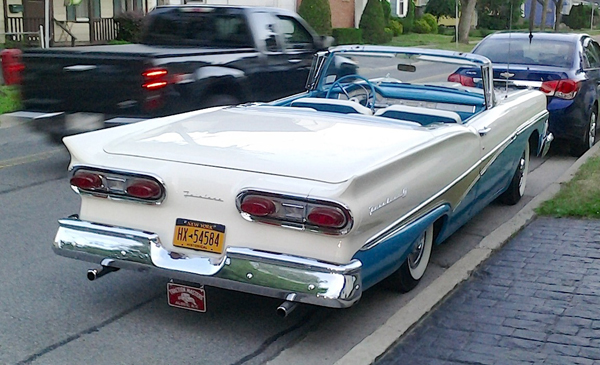 Luckily, like most everyone else these days, I always seem to have a camera in my pocket. So I was able to make a quick U-turn in Lancaster when I saw this 1958 Ford Fairlane 500 Skyliner parked in front of a restaurant in the village. Ford was the only one of The Big Three automakers to feature a retractable hardtop convertible in its regular lineup, from 1957-59, and they sold about 48,000 of them during the three-year run. They were a remarkable engineering feat, with (according to Wikipedia) six electric motors (only five for 1959 models) four lift jacks, a series of relays, ten solenoids, four locking mechanisms for the roof, and a total of 610 ft. of wiring. Yikes! Jim Corbran, RRofWNY Check out our new Facebook page: LuvTheCheapies The post RealRides of WNY appeared first on Buffalo Cars.