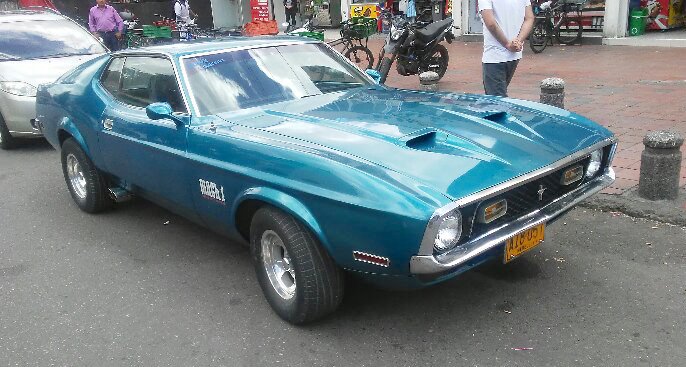 Not every Ford Mustang Mach 1 still on the road is here in North America. This one, circa 1971-72, was sent in by former WNYer Tad Dziekonski during an extended stint in Bogotá, Columbia. Tad’s found quite a few old cars still in service down there, from family cars to old SUVs. The Mach 1 was advertised by Ford as “…ready to move you over roads near and far in Mach-nificent style.” Hard to imagine, but back in 1971 Mustangs came with no standard audio system. For your listening pleasure, options included: AM radio; AM/FM stereo radio; or AM radio with stereo tape deck (8-track!). Standard Mach 1 powerplant (in the US) was a 302CID V-8; optional were V-8s of 351 and 429CID. Not much changed with the Mustang from 1971-73 — but in 1974 Ford rolled out a Pinto-based Mustang II. Holey moley!