WE HAVE ALL BEEN HERE BEFORE 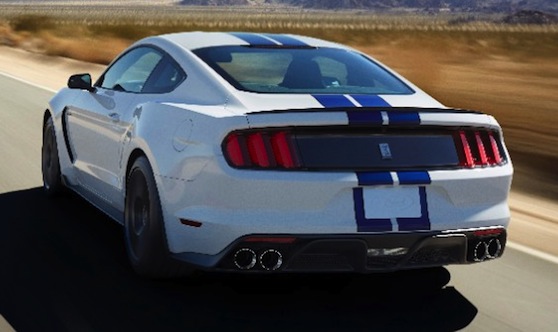 WE HAVE ALL BEEN HERE BEFORE by Jim Corbran, Automotive Columnist Or to paraphrase Crosby, Stills, Nash & Young: it’s deja vu all over again. Back when I was growing up in the 1960s, many American men, those both of and not of driving age, fell into one of three camps: Chevy, Ford, or Mopar. In the pony car wars, this translated to: Camaro, Mustang, or Challenger/Barracuda. The dear ‘Cuda has since departed, but we still have the other three, and the race is still on. Ford announced at the recent Los Angeles Auto Show the return of the Mustang GT350. It should compete nicely with the likes of the new cars in its rivals’ showrooms. The new GT350, borrowing the moniker of the 1965 Shelby car of the same name, will come equipped with Ford’s 5.2L V-8, the Blue Oval’s most powerful-ever naturally aspirated engine which will pack more than 500 horses under the striped hood. Don’t expect nothing more than straight-line performance from the new GT350, as Ford has built the car for the open road, with special attention paid to the chassis, wheel/tire combination, and braking system. Bodywork also figures heavily into the equation, with changes made not only for looks’ sake, but with the ideas of aerodynamics, better fitting of special internal components, and mechanical airflow all taken into account. The first GT350 available to the public will be sold at a Barrett-Jackson auction in Scottsdale, Arizona on January 17, with proceeds to benefit JDRF. You can read more on the GT350 here: https://media.ford.com/content/fordmedia/fna/us/en/news/2014/11/17/shelby-gt350-mustang-the-legend-returns.html ### Jim Corbran, Automotive columnist for Artvoice Read You Auto Know every other week in Artvoice, and check the YAK blog daily here: http://blogs.artvoice.com/avdaily/category/you-auto-know/ The post WE HAVE ALL BEEN HERE BEFORE appeared first on Buffalo Cars.