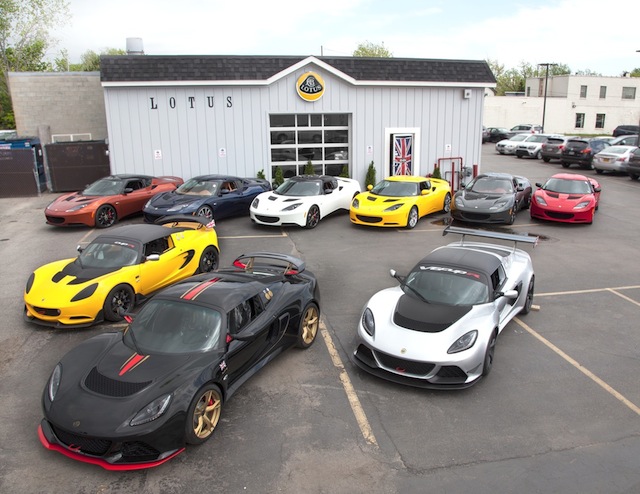 by Jim Corbran, Automotive Columnist Tucked away in the back corner of the Mike Barney Nissan lot at Sheridan and Millersport is one of the more interesting car dealerships in the area. Lotus of Western New York opened for business just about a year ago, and besides having one of the more interesting inventories around, the small, inconspicuous showroom is also a mini Lotus museum, with many rare artifacts lovingly assembled by Lotus WNY’s main cook and bottle washer, Matt Serwacki. Matt is not just a salesman, although he’ll gladly sell you a car, but he’s a walking Lotus encyclopedia. That Formula One car’s wing up there on the wall? He’ll fill you in on its history. That seat belt over there? He may have helped the driver buckle-in at some point. Photographs, other famous race car parts, banners… they’re all there waiting to have their stories told. And of course there are cars. New and used Lotuses (Loti?) fill the showroom/delivery garage and overflow into other storage areas. Some of these are rare cars, indeed. Like the black Exige LF1 in the photo. It’s a track car (can’t be licensed for street use) which Serwacki recently sold to a buyer in Canada, one of only five such cars to be imported to the U.S. (and three of them were brought here to Lotus WNY). Only 81 of these were built for worldwide distribution, each commemorating a Lotus Grand Prix victory (the pictured black car is in honor of Innes Ireland, who won the 1961 U.S. Grand Prix at Watkins Glen). The U.S.-bound cars are track cars, while the rest of the world’s are street-legal machines which resemble the U.S. cars but are not track-ready. Lotus WNY doesn’t sell only track-ready race cars, but also the beautiful Evora and Elise street-legal sports cars. The Evora is available as a 2+2 in addition to the two-seater, while the Elise (my favorite) is a traditional two-seater only. Lotus WNY also deals in used Lotuses and other trade-ins which come into the dealership. So if you stop by — and I think you should, even if just to look around — bring a cup of coffee if you have the time. And ask Serwacki about his time in Africa. Better bring an extra-large coffee; it might take a while! more info at: http://lotuswny.com ### The post WNY ASSUMES THE LOTUS POSITION appeared first on Buffalo Cars.