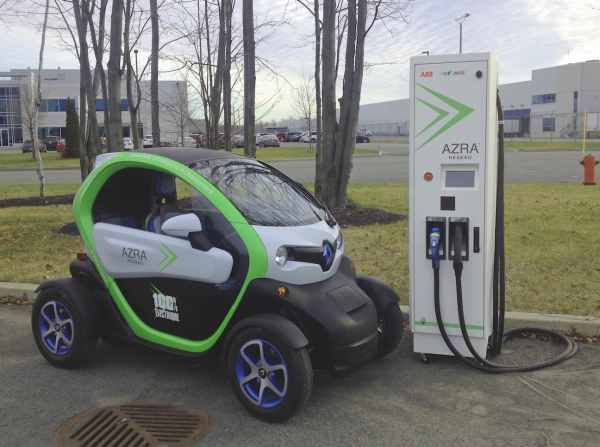 YET ANOTHER UNUSUAL FRENCH CAR INVADES NORTH AMERICA… by Jim Corbran, Automotive Columnist In what might be considered bad timing in the face of cheap gas prices, France’s Renault has landed its Twizy electric cars on the shores of Canada. Okay, maybe it’s not a car after all, as Groupe Renault’s official press release calls the Twizy 40 (its official Canadian nameplate) a quadricycle. With a top speed of 40km/h, Transport Canada has placed the Twizy into the category of low-speed vehicles (four-wheeled electric vehicles with a top speed of 32-40 km/h), which will keep them mostly in urban areas, so don’t expect to see the Twizy whizzing up the QEW anytime soon. The Twizy will be sold in Canada by Renault’s partner, AZRA Canada, a Québec-based company which operates a chain of charging stations. No official word yet from Renault on any U.S. marketing plans. More info? See a European driving review video, and read more on the Green Car Reports website here. There’s also a US-based Facebook page here. ### The post YET ANOTHER UNUSUAL FRENCH CAR INVADES NORTH AMERICA… appeared first on Buffalo Cars.